New article in The Concordian about the Art Hives Science Shop 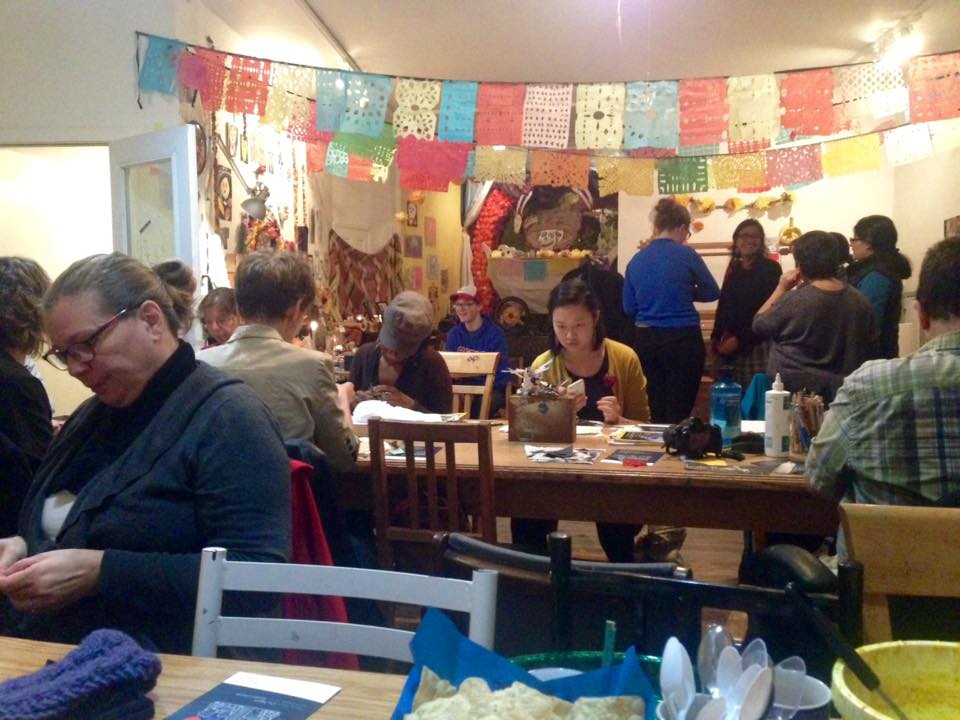 Discussing death in a positive way

University of the Streets Café hosts a discussion on embracing death

Attendees and speakers discussed embracing and accepting death through rituals at the University of the Streets Café event held on Nov. 4.

The conversation was held in honour of the Latin American holiday Dia de los Muertos, which translates to “day of the dead.”  The public holiday is mostly associated with Mexico, where it originated, but is also celebrated in the rest of Latin America. This holiday, which was celebrated on Nov. 1 and 2, unfolds as a festival, with lots of face painting, dancing, music and remembering.

The discussion featured speakers Kit Racette, who runs regular Death Cafés that allow people to speak openly and freely about death in a non-judgmental environment, and Lilia Luna Gonzalez, who grew up in Mexico and, as such, offered a different cultural perspective on the subject of death and insight on Mexican rituals surrounding it.

About 20 people gathered at the Ruche d’Art St-Henri, a small art studio filled with artwork and candles, to discuss death and its many different aspects. The discussion explored the cultural norms surrounding death, dealing with both grieving and accepting one’s own death, different methods of burial and other similar topics. Anyone present at the discussion was encouraged to take part in the discourse. The conversation was moderated by Genevieve Brown, a Concordia student.

Racette voiced her beliefs regarding the way modern Western societies handle death. “For me, the question of death is really important,” she said. “When was the last time you actually had a conversation about death? There’s a modern-day absence of the relationship with death, that people have had for thousands of years… There is an absence of ritual.”

She spoke about how death is often perceived negatively in modern Western culture, rather than as something that’s an unavoidable part of life. “The idea that death is a failure is deeply ingrained in our culture,” she said. She believes that embracing death is an important part of life. “When we realize that our days are limited, we give ourselves the chance to value every day, every encounter, every moment,” she said.

The Death Café project was started in 2010 by a British man named Jon Underwood. Now, people host Death Cafés in their homes and public venues in over 30 countries. Racette has hosted numerous Death Cafés, including this event, in the greater Montreal region.

Gonzalez, who grew up in Mexico, shared her experiences with death from a different cultural point of view. She went over many key differences between how death is looked at in Mexico versus how it is handled in Canada and the US.

For example, she said, “Here, we’re obsessed with control, both in how we die and what happens after.” She spoke about how, in Mexico, death is seen as much less taboo and negative. She shared anecdotes about how, throughout her childhood, the annual Dia de los Muertos celebrations were focused on remembering those who were lost in a positive way, with brightly coloured artwork and flowers in abundance. She mentioned that, in Mexico, death isn’t usually seen as something to be feared—it’s simply a part of life.

Many of the meeting’s attendees shared stories and personal experiences with death, which fit with both Racette’s goal of encouraging discourse about death and Gonzalez’s personal recollections of how Mexican culture treats it.