Incorporating Art In The Science Curriculum 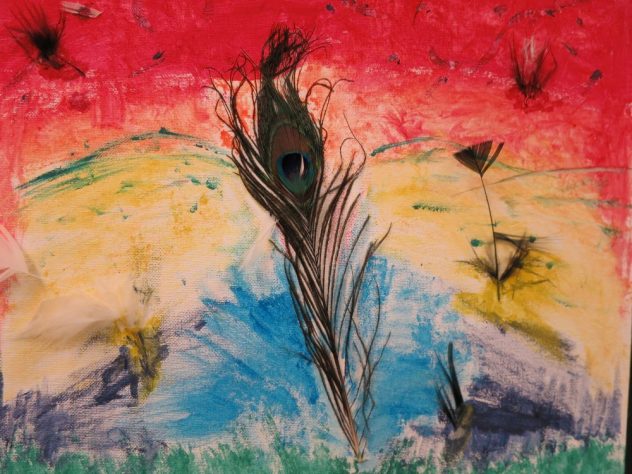 Incorporating Art In The Science Curriculum

I have been teaching chemistry to science students at Vanier College both in pre-university and career programs for the past 17 years. Since 2009, I have also taught History and Methodology of Science, a mandatory, fourth-semester course that is part of Vanier’s Liberal Arts program. From the very start, it was evident that the approaches that I had used with science cohorts were not well suited to Liberal Arts students due to their insufficient backgrounds from high school and generalized lack of interest in the subject. Most of these students have phobias for mathematical formulas and calculations and do not see the purpose of having a science course as part of their program. Finding ways to spark students’ curiosity and imagination in this course became my main challenge, an analogous situation that I encountered at the beginning of my career while trying to reach out to disengaged high school students in Brazil.

Following the ideas of Imaginative Education, I searched for alternatives to engage Liberal Arts students by creating a narrative that linked their previous knowledge in philosophy, history, and art with the content of the science course. Believing that imagescan engage humans in ways that words and numbers cannot, I decided to merge art and science within a historical perspective.

I designed a course that compares the evolution of visual arts and the contemporary changes in scientific paradigms since the beginning of the modern era. After studying the subject, I identified underlying patterns to connect arts and science. For example, from the Renaissance to the late 19th century, the generalized belief that scientific knowledge described physical reality legitimized the supremacy of Newtonian cosmology. During the same period, artworks utilized a realistic approach to depict an objective world consisting of well-defined and recognizable figures in three-dimensional space. The depiction of the world as objective reality changed abruptly in both art and science at the beginning of the 20th century with the development of Impressionism and Quantum Theory. Emphasizing the similarities between the paradigm changes in both scientific concepts and artistic forms of expression became the centerpiece of my upgraded Liberal Arts science course. Using narrative, images, and humanization of meaning, I was able to imaginatively and emotionally engage my students in the History and Methodology of Science course.

Up until mid-19th century, the prevalent idea was that painting should either faithfully represent reality or present an idealization of reality (Shlain, 1991; Szamosi, 1986). This view went hand in hand with the conceptual framework of Newtonian mechanics. At the dawn of the 20th century, two individuals—one artist and one scientist—revolutionize their respective domains by recognizing the fundamental role of the transitory character of human perception in the construction of reality. In addition to their remarkable imaginations, Claude Monet and Albert Einstein also shared their obsessive interest in understanding and exploring the properties of light.

My students analyzed Monet’s paintings in which the representation of the world no longer consists of well-defined and recognizable figures in three-dimensional space. Instead of focusing on the geometry of shapes, Monet eliminates the outlines and boundaries so that objects are no longer clear-cut and solid. Monet tries to capture on canvas the very act of perceiving nature by showing how light changes our visual experience. He was the first artist to immerse the viewer in the delight of color for color’s sake by painting the same theme under different weather conditions and light exposures. No two paintings of even the same subject look alike (Leibowitz, 2008).

The timing of this changing perception in art coincided with a revolution in science that challenged the objectivity of classical Newtonian mechanics (Greene, 2004; Gamow, 1966). Like Monet, Einstein was obsessed with the nature of light. In 1905, he explained the photoelectric effect by proposing that light can behave as both waves and particles. The wave-particle duality of light—a behavior also observed with matter later—became one of the ground-breaking concepts in quantum theory. At the atomic level, Classical Newtonian mechanics does not apply and is unable to predict the behaviour of matter and the unexpected experimental results (Gardner, 1993; Isaacson, 2007).

The revolution in Monet’s art was in step with the development of modern physics’ radical change of worldview at the same time. We do not know what light is, only how it behaves: as a wave in some experiments and as a particle in others (Falk, 2002). The limitations of human perception trump the desire to describe the world objectively by emphasizing the construction of reality rather than its discovery (Hofstadter, 1999). A true revolution had started.

This Is Not A Pipe: Magritte Meets Einstein

The works of the Belgian painter René Magritte are used in this course as illustrations of the notion of symbolic representation (Umland, 2013). Magritte’s paintings frequently portray juxtaposed ordinary objects in unconventional, unexpected contexts that lead viewers to new interpretations that are somewhat disruptive to consider. His iconic masterpiece The Treachery of Images (1929) depicts a pipe with the disclaimer “This is not a pipe,” which emphasizes the distinction between objects and their representations (Sylvester, 2009). In the The Human Condition (1934), the painting within the painting perfectly captures the scene behind it, which is paradoxical because the image can never equal reality (Meuris, 2004). Students are invited to associate these paintings with scientific concepts. For example, all atomic models that we study throughout the course are only representations of aspects of an atom and neither the atom itself nor its true nature. It might look obvious to an expert but this realization helps students understand the high level of abstraction of chemical models and gives them an appreciation for the images, symbols, and conventions used in the field.

In my History and Methodology of Science course I also establish links between the ground-breaking works of Sigmund Freud, Pablo Picasso, and Albert Einstein in the early 20thcentury. Published in 1900, Freud’s The Interpretation of Dreams describes the crucial role of the unconscious in determining human behaviour by placing emotions and sensations as more important than rational thought (Panek, 2004). In 1905, Einstein published a series of revolutionary papers including one about the photoelectric effect and another about the Special Theory of Relativity. These papers revolutionized core scientific paradigms from Classic Newtonian Physics by reconceptualising the basic notions of time, space, matter, light, and energy. During the same period, Picasso began experimenting with deconstructing physical forms to portray the world away from classical, realistic descriptions by not attempting to represent reality faithfully or to idealize it. This innovative approach resulted in his 1907 creative breakthrough Les Demoiselles d’Avignon, which is one of the most important paintings of the 20th century (Miller, 2001).

By analyzing the works of these extraordinary individuals, students began to get hold of the Zeitgeist—the spirit of the time—present at the dawn of the 20th century and to understand that neither art nor science evolve in isolation, but they are rather umbilically connected as part of the collective human mindset and experience.

Science and art would never be the same after these revolutions changed our view of reality (Kandel, 2012). It is crucial for science students to understand that scientific knowledge is not absolute, but it is instead based on mental models that have intrinsic limitations to their applicability.

The newly established connections made in the course between science and the visual arts intrigued my Liberal Arts students. They started seeing science differently—through tools of the philosophic imagination—as part of a complex web that links aspects of art and philosophy to the political and economic realities of a given historical period. This new framework validated for them the need for a science course in the program. Now they think that acquiring basic science literacy is paramount in our times.

Fostering imagination and creativity requires time and proper incentives. By employing cognitive tools, I found it possible to engage my students emotionally and imaginatively with the subject matter in my course. I have found that exposing students to imaginative works in multiple forms facilitates the development of strong emotional connections with the topic.

For example, students enjoyed reading the play Picasso at the Lapin Agile by Steve Martin (1996), which uses humor to portray a fictitious encounter between Einstein and Picasso in Paris in 1904, prior to their creative breakthroughs. To emphasize scientific concepts through images, students played with the interactive simulations Photoelectric Effect and Models for the Hydrogen Atom created by the University of Colorado, Boulder, and available through their website. The simulations activate their brains to think in terms of pictures and images rather than only with the words and numbers that are the focus of traditional approaches.

After the presentation of the course material, I created an art-lab assignment where I asked students to create visual representations that they associate with the idea of uncertainty and the clash between Classical Newtonian cosmology and the counterintuitive nature of quantum mechanics.

Finally, the Art &Science Project is a big assignment at the end of the course where students are required to both create a visual representation that portrays core scientific ideas and write a rationale for its process of creation and links to the course content. (This project has been described in detail here.)

This longer-term, iterative creative project requires both imagination and the ability to integrate concepts. The students’ creative process is as important as the final product. When compared to traditional instructional strategies—the pervasive lecture/drill/practice—used in science courses, this activity embodies a remarkable shift in philosophy of teaching, curriculum design, and pedagogy. Students assume a more active role in their learning process by constructing meaning through high-level cognitive activities. There is also an incentive to think creatively and imaginatively, both not common characteristics of traditional approaches to teaching science. Incorporating art in the science curriculum has enormous potential to spark students’ interest in both fields. The time has come to embrace imagination and creativity at all levels of instruction.

I would like to acknowledge the invaluable contributions of Anna Timm-Bottos, Laura Huddart, and Janis Timm-Bottos of the Department of Creative Arts Therapies and Art HIves Science Shop, Concordia University, Montreal.

Falk, D. (2002). Universe on a T-shirt: The quest for the theory of everything. Toronto, Ontario: Viking Canada.

Kandel, E. R. (2012). The age of insight: The quest to understand the unconsciuos in art, mind, and brain. New York: Random House.