Article in The Concordian about the Art Hives Science Shop 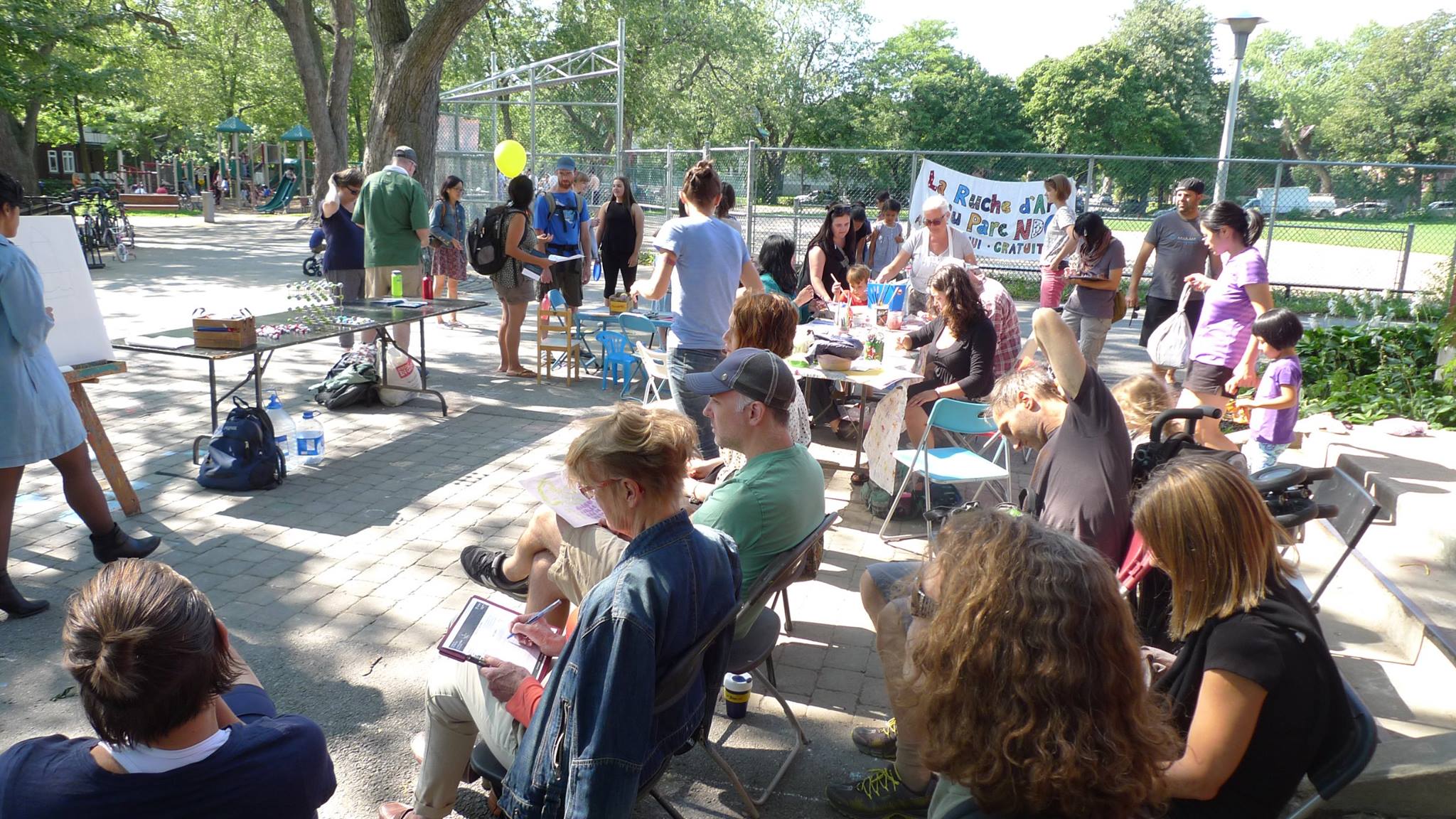 “Treating” it right: a conversation about water

The first lab in the University of the Streets’ conversation series took place on Sept. 3

Art Hives and University of the Streets Café, two separate Montreal community organizations, came together on Sept. 3 at the NDG Art Hive to hold their public conversational lab, which discussed the way society uses and treats its bodies of water, while tying art-making into the event.

Tricia Toso, the event moderator, said the labs were being held to encourage the community to come out together and get more involved in issues pertaining to arts and science. The lab appeared to do just that.

In the middle of Notre Dame de Grâce Park, children and parents, alongside other members of the community, gathered under a clear blue sky to take part in the premiere event.

Toso began the lab by inviting attendees to participate in arts and crafts on a nearby table.  Many of the children at the event crowded the table, which was covered with pieces of coloured chalk, paint palettes, scissors, brushes, glitter and glue.

She explained how the consulted scientists justified giving the go-ahead to dump the sewage—they believed that since the river was much larger than the amount of sewage, dumping it wouldn’t affect the quality of the drinking water.

“The scientists said ‘dilution is the solution to pollution,’” Tandan said.

The decision had its pros and cons, however.

“We had to decide between dumping the sewage in the river or letting it run into the water treatment facility which could have affected the whole municipality.”

Jailson Lima, who holds a PhD in inorganic chemistry, also gave a presentation. Lima recalled a time when he took his students to Pointe-aux-Trembles to visit the Jean-R. Marcotte plant, a primary water treatment facility on the eastern tip of Montreal.

“You see a huge swimming pool of greyish water, and the guy says: ‘Let’s add chlorine to it and dump it straight back into the river,’ and the kids are shocked and they ask: ‘Why? Why don’t we treat it further?’”

Lima used the city of Calgary and one of its rivers as an example. Since the river is much smaller, the effect of dumping untreated sewage in it is much greater. Therefore, the city of Calgary must use tertiary water treatment plants to treat their sewage.

“It’s not the poison that kills you, it’s the dose,” said Lima as he defended dilution as the solution—but he said while dilution works most of the time, it doesn’t work every time. Even if diluted, there are some impurities in water that can cause serious problems for the environment, he said. “Today in the United States, hormones in the water are creating an imbalance between the number of male and female fish.”

Lima then gave attendees tips on how they could save water.  He said everyone should reconsider how they eat or what they buy because every piece of food or type of product has its own “water footprint.”

Just as a carbon footprint shows how much carbon is used to make a certain product, a “water footprint” is the amount of freshwater that the process requires.  For example, it takes just under 7,000 liters of water—or about a 15-hour long shower—to produce one pound of bovine meat, according to a 2010 study published by the UNESCO-IHE Institute for Water Education.

“The way we are consuming is using a lot of water,” Lima said. “This cannot go on forever.”

Canada has a history of using a lot of water. In 2009, The National Post reported that Canada ranked second only to the United States in the developed world in liters of water used per person each day.

Since then, however, newer reports show that Canada’s water usage has slightly improved. In 2016, The Conference Board of Canada gave Canada a “B” score for “water withdrawals”—the total volume of water removed from a body of water—ranking the country 10 out of 15 other peer countries.  Three years prior, on the same evaluation scale, Canada was ranked 15 out of 16 peer countries.

Saturday’s discussion also showed how the relationship between a consumerist society and bodies of water can be complicated.

Toso said after the discussion: “There are few places where people can come and have an open discussion about their [water] usage, and get access to a scientist [like Lima].”

Saturday’s conversational lab was the first in the “UrbanBodies series.” The next lab, called “Earth – Herself,” will discuss how the quality of soil affects urban gardening and health.