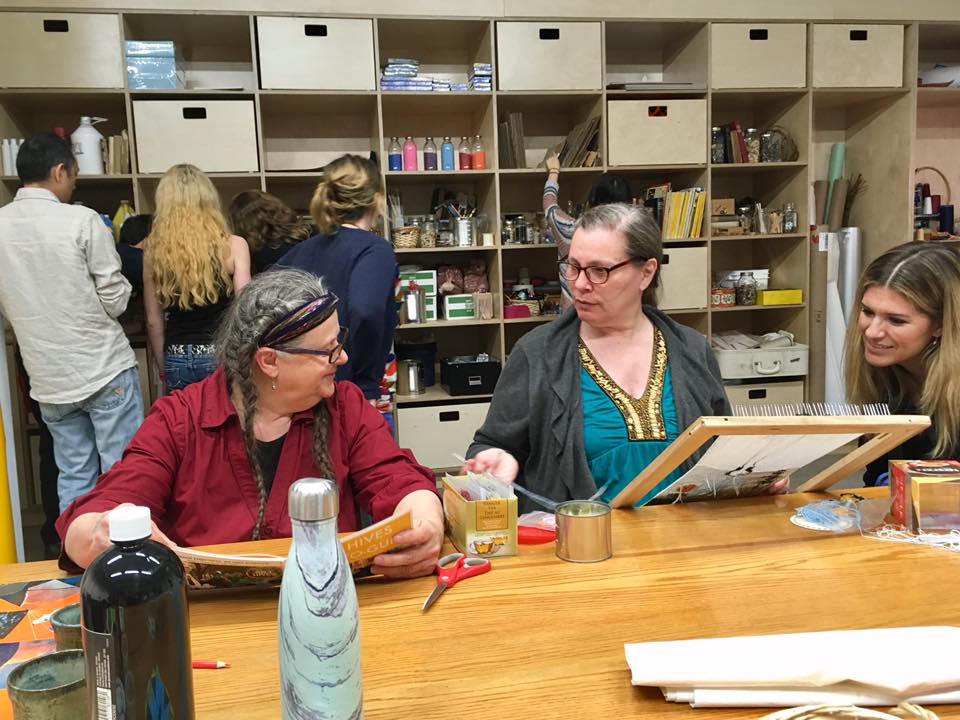 IAN MCGILLIS ianmcgillis2@gmail.com
Published on: May 6, 2017

Art Hives, a worldwide network of community spaces dedicated to art creation, now has a spot in the basement of the Montreal Museum of Fine Arts. "When given the right environment, people have a way of blossoming in the most amazing ways," says Janis Timm-Bottos, associate professor in creative arts therapies at Concordia University and a founder of the movement.

Think of an art institution on the scale of the Montreal Museum of Fine Arts and what probably comes to mind is a place to go for the respectful appreciation of great works. What you probably don’t tend to think of is creating art of your own within those same walls that exhibit Chagall and Warhol. But that perception is beginning to change. Art Hive, a worldwide network of community-access spaces dedicated to art-based inclusion, now has a space in the MMFA basement.

Dr. Janis Timm-Bottos, associate professor in creative arts therapies at Concordia University, first hatched what became the Art Hive concept 20 years ago in Albuquerque, N. M., where she had moved from her native Baltimore. At the time, she was shifting from being a physical therapist to an art therapist; feeling disillusioned with the American medical managed-care system, she became more involved with colleagues involved in health care for the homeless.

“We starting asking people, ‘You’re on the streets, we’re a medical facility, but what else can we do to support you in this social dilemma?’ ” Timm-Bottos recalled. “A lot of those people were artists, who said: ‘We know where to get materials, we have the skills, we just need a place.’ That whole idea of space is more critical than I ever would have imagined. When given the right environment, people have a way of blossoming in the most amazing ways.”

Moving to Canada when her Canadian husband retired, Timm-Bottos quickly began applying what she’d learned; in Montreal, where she took a position at Concordia, her efforts started with the still-thriving Ruche d’Art space in St-Henri. “It turned out there had been a place with the same name in the neighbourhood in the ’60s, a co-operative where women made crafts to support their families,” Timm-Bottos said. “This isn’t a new idea, this is something that goes back a long way in our culture.” From St-Henri, the idea spread organically around the city: there are now more than 30 Art Hive spaces in Montreal. What makes the newest space unique is that it marks the first time an Art Hive has been inside a museum. “This was two major institutions coming together, so it took some work,” Timm-Bottos said.

Situated as it is in the middle of a rich demographic mix – the well-to-do, city centre workers, students from nearby Concordia and McGill, longterm downtown residents struggling with rising rents and gentrification – the museum and its Art Hive space are in a perfect position to create a rare coming together of social streams that don’t normally mingle in such close quarters. What’s more, museum visitors from all over the world who see the space and return home talking about it make the location an ideal dissemination point.

Stephen Legari, a graduate of Concordia’s creative arts therapy program, becomes the museum’s first full-time art therapist this month; his past experience has included work in alternative schools, with at-risk students, in addiction recovery, and with prison inmates.

“I’d been working mostly within institutions, but Janis introduced me to the possibilities of working in and through the community,” said the Ottawa native, who came to Montreal in 1990. “I’d never had that experience of community here before. It was a different way of working that appealed to me because of the number of people it could reach. Often in therapy, you’re working with one person or one group at a time, but here you can cast the net so much wider and create truly inclusive spaces. On a given day I could now be with seniors, children, adolescents, families, often people living in isolation. To see how this could reach out to them, and offer something that you can’t really find through our health care system, really spoke to me.”

Timm-Bottos reinforces Legari’s emphasis on shared space. “The individualistic and the competitive have gotten so out of control in our society. We’re seeing that we have to have places like this, to meet across those divides. People seem to know that intuitively, and work pretty hard to shift their identity a little, to make themselves more accessible to others while they’re in the space. It’s important that when people come back they return to a familiar place, feeling like they’ve had an influence on the environment.”

The museum’s Art Hive is indeed an intimate setting. Even if you’re not actively engaging with those around you, you’re aware of them, and conscious of allowing them their creative elbow room.

Suzanne Melanson, a Montrealer for two years, was at the Hive on one of its first days last month, working on a small-scale tapestry.

“Most people here get their inspiration from donated and found items,” she said. “The frame I’m using came from the Concordia Centre for Creative Re-use, which is associated with the Hive. When I’m done, it will probably go back to them. I first got the idea for weaving by playing around with straps from women’s clothing, those little things you use to hang things, in blazers and shirts. They’re annoying, so I started cutting them out, and saved them for years. There’s no cost involved in working here, so it’s the perfect place for someone to play around with a medium; if it’s not for them, they can back off and try something else.”

Each of the elements in Melanson’s tapestry design symbolizes an aspect of her family history; as we chatted and she continued weaving – paying particular attention to a beaver inspired by the familiar Parks Canada logo – it was striking just how conducive the Art Hive space is to the sharing of stories.

“Most people here get their inspiration from donated and found items,” said Suzanne Melanson. She created a tapestry to illustrate her family history, using straps collected from women’s clothing.

“I’m a New Brunswick Acadian,” she said. “Most Acadians have undocumented native blood in their family tree, because during the deportation of 1755 some of the Acadians went into the woods and cohabited with the the Mi’kmaq. My father, who has some of the physical attributes, was given the nickname the Red Beaver, so we have a family cottage that’s been named Beaver Lodge. I knew I had to incorporate that idea somehow.”

Melanson’s story is a perfect illustration of her belief that you connect with people when they show you their work.

“If it were up to me a village would have only one iron, and everyone would have to go there to iron together. You can check in with people. What are they up to? What’s new with them? And I don’t say that from an economic point of view. We sometimes think of isolation as strictly a poverty issue, but people can have economic means and still be isolated for various reasons. It’s important to know that you don’t have to do it alone.”

Art Hive’s open workshops at the Montreal Museum of Fine Arts are held Wednesdays, 3 p.m. to 8 p.m., and Sundays, 1 p.m. to 4 p.m.,  in the Michel de la Chenelière International Atelier for Education and Art Therapy (Basement: 2200 Crescent St. entrance). Sessions are free, with no advance booking required. For information on other Art Hives in Montreal and elsewhere, visit arthives.org.